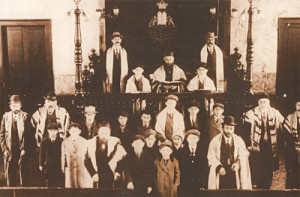 The history of Congregation B’nai Israel (CBI) goes back to the late 1800s.  In 1897, when William McKinley was elected President of the United States, prospectors flocked westward during the Klondike Gold Rush, and here in Danbury, Connecticut, a small group of Jewish immigrants from Eastern Europe and Russia formed Danbury’s first synagogue.  Our synagogue was chartered by the State of Connecticut in 1897 as the “Children of Israel”, and this is how we began our hundred-twenty-five-year journey.  From 1897 to today, CBI has served the Jewish community of greater Danbury.  Our history has touched three centuries and multiple generations.

Our predecessors were immigrants who escaped the ghettos, pogroms, and forced military conscriptions of Eastern Europe and Russia.  Their primary goals were establishing a synagogue and a Jewish cemetery.  In 1898 the Children of Israel Society founded its cemetery on Miry Brook Road.  Establishing a synagogue would take money, time, and planning, so the roughly seventy-five Orthodox and twenty-five Reform families that made up the Danbury Jewish community met in homes for many years for community prayer and life cycle events.

Along the way, CBI grew and put down roots.  In 1907, the “Children of Israel Society” purchased a building in downtown Danbury on Liberty Street.  In the 1950s we became part of the United Synagogue of Conservative Judaism.  In 1955, floods damaged the Liberty Street building which was eventually sold.  Our next home was purchased in 1967, a few blocks away on Main Street.  It was sold in 1972 when plans for a new building were underway.    Our new synagogue, nestled in the verdant hills of Connecticut, opened its doors on a beautiful autumn day during the High Holidays of 1974.  It marked a New Year and a fresh start for Congregation B’nai Israel in our new spiritual home located at 193 Clapboard Ridge Road in Danbury.

For over one-hundred-twenty-five years, CBI congregants have been guided by and inspired by many Rabbis.  Each has brought his or her own special gifts.  In 1979, Jack Moline came to us as a student, and upon ordination, became our full-time Rabbi.  This progressive and charismatic leader established fully egalitarian services by counting women in our minyans and encouraging them to lead services.  Rabbi Josef Davidson brought social action projects and community service to the forefront.   Rabbi Vivian Mayer, who became our first female Rabbi in 1996, enhanced the spiritual dimension of our services.  Rabbi Nelly Altenburger came to CBI in 2006 and helped expand the intellectual, educational and social development of our congregation.

We are proud to have Rabbi Rhonda Nebel as our full time rabbi as of July 2020. Rabbi Nebel brings a wealth of knowledge and experience in the Jewish and interfaith communities.  She also brings a warm and inviting demeanor, and a promise to reach out to our members and the greater Danbury community, all while coping with the challenges of life during the COVID-19 pandemic.

Congregation B’nai Israel welcomes all worshippers to our lively Jewish community.   We celebrate life cycle events and holidays at B’nai Israel as a family and community.  We strive to be a kind, loving and inclusive congregation.   We strive to provide comfort, spiritual connection, and religious traditions amidst the challenges in this ever-changing world.   Our goal for the coming years is to build upon our membership and to continue our strong foundation of Conservative Judaism.

Chartered by the State of Connecticut as the Children of Israel on September 19, 1897, Congregation B’nai Israel, as it is now known, celebrated its centennial in May 1997.

The exodus of Jews from Eastern Europe and Russia were escapees from the poverty of ghettos, pogroms and forced military conscription of their countries of origin.  Approximately 75 Orthodox and 35 Reform families came to Danbury to participate in retail business, building trades and Danbury’s thriving hatting industry.

Establishing a synagogue and a Jewish cemetery were their primary goals.  Articles of Association were filed with the Danbury City Hall on October 24, 1898 for the Children of Israel Society cemetery on Miry Brook Road, a ½ acre parcel for which the families paid $100.

Homes were used for services during those beginning years.  A seven page constitution was dated November 24, 1904.  On September 4, 1907, a warranty deed registered in City Hall conveyed property from the First Universalist Society on Liberty Street to the Children of Israel Society.  A mortgage release was dated 1938.

Several dozen families, third and fourth generations of the original signers of the fourteen  original 1897 families still reside in the greater Danbury area.  In the 1950’s, we became part of the United Synagogue of Conservative Judaism.  In 1955, floods ruined our building and since more space was needed anyway, in 1967, the building was sold and eventually demolished.

We purchased the Universalist Unitarian Church at 347 Main Street in 1967 and the congregation became known as Congregation B’nai Israel.  This building was sold in November of 1972.  Torahs were stored at the city’s United Jewish Center until two acres of land on Clapboard Ridge Road were purchased in 1974.

By Yom Kippur of 1974, services were held for the first time as the roof was erected on our current building, which was dedicated in 1975 by former mayor of Danbury, Charles Ducibella.  The synagogue became the lively focus for enrichment of Judaism in the area and the place to mark lifecycle events.

Rabbi Stephen Parnes was our spiritual leader during the early years in our new building.  In 1977 Rabbi Rick Sherwin, a recent graduate of the Jewish Theological Seminary served us with zest and youthful enthusiasm.  Our religious school began and the Maimonides Day School had its beginnings in our basement from 1978-1981.

In 1979, charismatic Jack Moline, a student at first, became an ordained rabbi and our first full time Rabbi until 1982. Egalitarian services, with women counted in our minyans and leading services began for us in 1986.  Our USY and Kadima youth groups for teens gained national recognition and we reached out to the FCI and engaged some prisoners in our services.  The local Jewish Federation in Danbury was also in the glory years of its mission.

Rabbi Josef Davidson was hired in 1996 and enhanced our services and brought social action projects and community service to the forefront.  He also taught us about medical ethics and other areas of his expertise.   In 1991, we purchased the house next door for a home for our future rabbis and their families.

In 1992, Rabbi Sam Weintraub joined us and combined traditional and contemporary ideas to make our  services more relevant to our congregants.  When Rabbi Vivie Mayer came in 1996, she interpreted text, added spirituality and her dynamic and innovative leadership to our CBI family.  Our members continued to be involved in all Jewish organizations in greater Danbury, especially the Federation, in numbers disproportionate to the small size of our membership.

Rabbi Nelly Altenburger came to CBI in 2006 and added to the learning, growth and development of  individual members and our congregation as a whole.

We are  proud to have Rabbi Rhonda Nebel as of July, 2020.  She brings a wealth of knowledge to our shul.  While she joined us during the COVID-19 pandemic, she is leading our services and reaching out to the members and the greater community.

Photos from the Centennial Journal. Click images for enlargements.

Judaism for Today In a Warm and Caring Environment.

Please stay tuned to member email announcements for our most updated details about services, classes, and other events.

Most Shabbat Services will take place in the synagogue with all mask and vaccination requirements remaining in place. Zoom links will be sent through email for those attending remotely.

Adult Ed is back–please let the rabbi know what you’d be interested in studying for the fall!

*Please stay tuned to your email for the latest updates and Zoom links to attend our events from home.